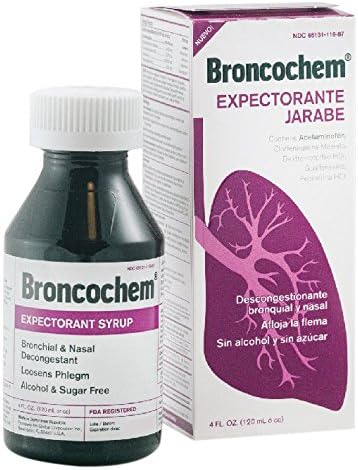 The oldest proven formulaÂ from Broncochem, Expectorant has earned its reputation as one of the safest and the most effective over-the-counter medications for clearing out phlegm and reducing chest and nasal congestion. We carefully createdÂ this formula to provide a comprehensive expectorant cold amp; flu solution that will save you from having to take more products than you really should.

Guaifenesin helps thin and loosen mucus in the lungs, and lubricates the irritated respiratory tract, making it easier to cough up theÂ mucus.

More Than an Expectorant

We donât stop at Guaifenesin. We understand that mucus is only a small part of the whole therapy for congestion. We added the right dose of Phenylephrine HCl, which works as a decongestant by decreasing swelling in the nose and ears, and makes it easier for you to breathe. We also added Acetaminophen, an ingredient that helps relieve aches and pains and reduce possible fever caused by most cold and flu. Another active ingredientâa slight amount of Dextromethorphan HBrâused in the appropriate dose in combination with Guaifenesin, becomes an effective way to relieve unproductive coughs caused by common cold, bronchitis, and other respiratory ailments. Dextromethorphan is a cough suppressants: it acts on a part of the brain (cough center) to reduce the urge to cough. And last, a small amount of Chlorpheniramine Maleate, helps reduce symptoms such as watery eyes and sneezing, by blocking the action of histamine.

When you have a cold or flu, you donât have to add unnecessary sugar to your diet. Sugar helps create moreÂ mucus andÂ phlegm. While many cold and flu syrups contain sugar, and many other sugar-free products contain sugar alcohols, Broncochem ExpectorantÂ prides itself in being free of alcohol and sugar. This makesÂ Broncochem ExpectorantÂ a much safer product for you to use.